We now accept cash or card!

You can click on each image to see a larger version. 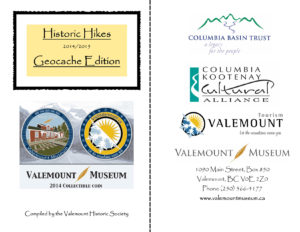 A collection of 15 self-guided hikes with GPS coordinates for heritage locations between Valemount, Albreda, Tête Jaune Cache, and Red Pass. The pamphlet contains a stamp page for you to collect at least 10 stamps from each geocache, in exchange for a collectible coin. Learn more about geocaching in the Robson Valley 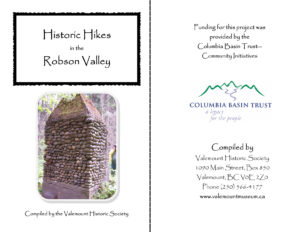 A collection of 16 self-guided hikes with GPS coordinates for heritage locations between Valemount, Albreda, Tête Jaune Cache, and the Alberta border. Please be sure that you are familiar with the operation of your GPS device, before using the GPS coordinates 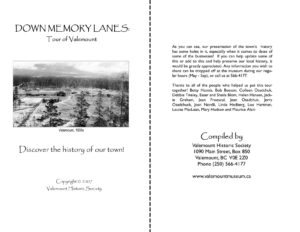 This pamphlet contains some of the history of our hometown, Valemount, BC. Inside the book is a timeline, photographs, and historic map. 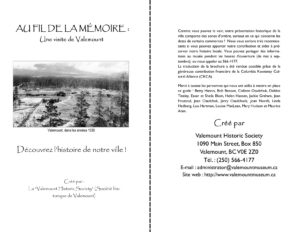 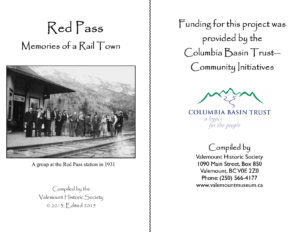 A history of the town of Red Pass. It documents the various buildings and camps in and around the town. It also contains information on the Kronstedt, Scully, Carr, Pooli, Sivecki, and West families. There is also information on various individuals and their history 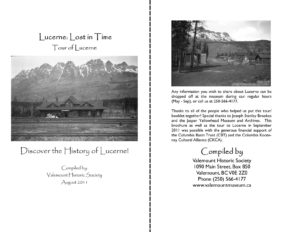 The town of Lucerne was named after a town in Switzerland. It contains history and photos of the town, and the railway. There is also some background on the families and people who lived in the area, as well as the flu epidemic that ravaged the town in 1918 Learn about Ishbel (Hargreaves) Cochrane’s life at Mount Robson. The booklet contains photos, excerpts from a few of her journals, stories from the trail, and some history of the provincial park. Produced as part of the BC150 program to celebrate Women, Seniors, Elders, and 150 years of BC. 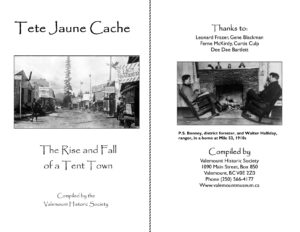 Explore the history of Tête Jaune Cache, an abandoned historic townsite. During railroad construction, it was the largest settlement west og Winnipeg. Contained in this booklet are numerous photos of the area during its peak, and a map showing locations of various sites, and more. The 1913 flood spelled the demise of the railroad town, reducing it to a few blocks of wood poking out of the Fraser River. 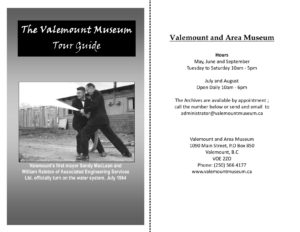 Take a tour through each area of our local history Museum, the building which was purchased in 1987 for $1. It has details on many of our exhibits. There are details of our outdoor exhibits: THe caboose, speeders, lookout tower, and the annex building. 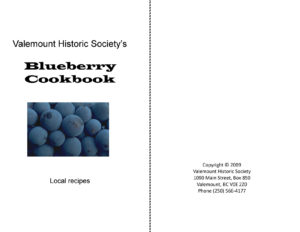 This cookbook contains 82 blueberry recipes, and 24 cranberry recipes. That’s over 100 recipes in total! All of the recipes are local, and have been collected from the area. Inside there are instructions for making breakfasts, cakes, cookies, desserts, pies, preserves, and beverages. 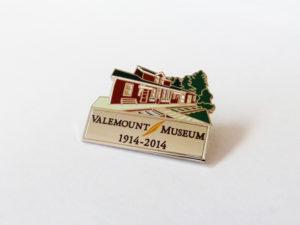 This book is a compilation of short excerpts and recounts of history relating to Yellowhead Pass. The book is filled with more than 600 pages of exciting stories of local’s lives and creates a picture of what the area was like in the past. It was revised and reprinted in 2019.